Better lighting is not an accident, but it creates oportunities

Luck, is when opportunity meets preparedness.  At least that's what my Dad taught me.  I see it all the time during a shoot when watching out for the elements of a good image.  The composition and the ambient light must be good for the scene.  And then, there is my ability to control an off camera light source that weighs just a few pounds and that can be competitive with sunlight.  That takes everything over the top because I can add as much or as little light to the subject as I desire.

However, my ability to “write with light” is what makes me a photographer, not my ability to press the shutter button on my phone or camera body.  Nor is my ability to create an image with serious manipulation in question.  I could add a mermaid-tail to her if I felt the need to do so.  I could take a flat lit image, feather select a region of her face and make it lighter in Photoshop to look as though I had a light there, but that is not exactly being a photographer (a writer of light) although adding highlights and shadows to an image to make it appear that it was better lit or to "shape" our subjects is photography and doing it in Photoshop is the hard way, letting a Lumedyne flash actually illuminate every image is the easy way. 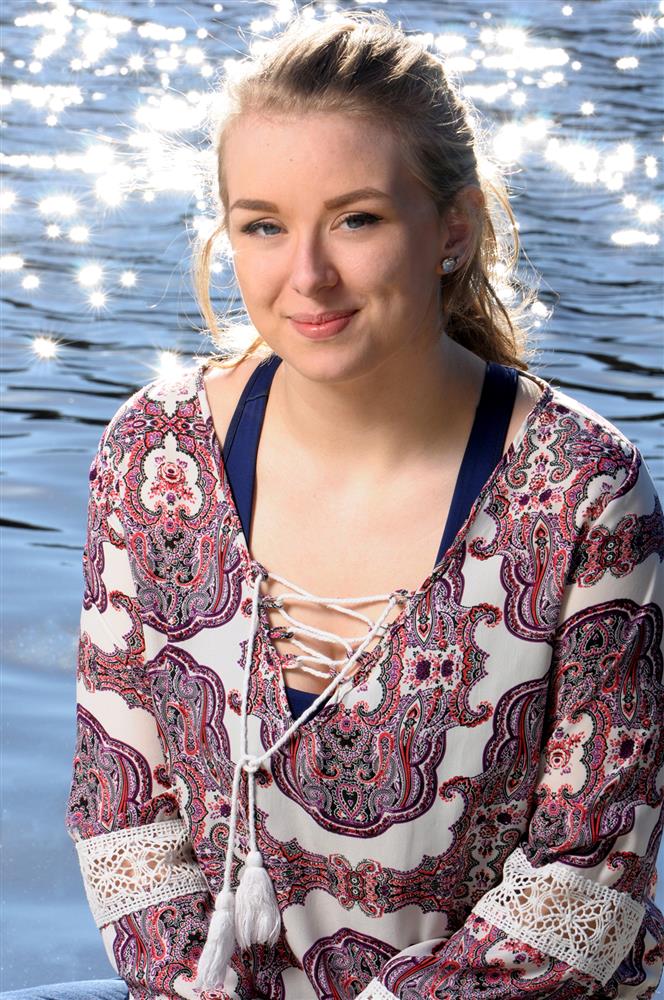 She is beautiful and the image was not hard to do once I set up the light.  I added light from off camera so it creates highlights, mid-tones and shadows.  If I light the subject from on-camera, I can add light but its about equal for all her features and would be flat, even though it could be bright enough and with a good color temperature.  Also, by working with the light off camera, we can use a light modifier to make the light source a diffused 30” face of an octi-box rather than a small point of light from an open flash.

The size of the light source and how close that I place it are exactly what defines the area between well lit and in the shadow.  The softer that transition is made the more natural it is and the less that small blemishes will appear.  The smaller the light source the more defined every feature will be.  Knowing that, lets me choose the light modifier that I use with my Lumedyne head to give me a wide range of possible looks with the same flash.

Remember also, I deliberately start with an exposure that has some degree of underexposure on her face because when I don't light those areas, this is how I create darker areas that give the 3D shape.  In general if I am working with light complexioned people, I know that over exposing their light skin will run out of contrast fast and just be white.  However, the range from slightly overexposed gradually down to substantially underexposed gives me a lot of shades of contrast.  Thus, I am actually using the shadows to shape her face as much or more than the specular light added to her.

If my subject has very dark complexion, the same exposure would still be perfectly accurate.  However, the range of highlights that I can add to properly exposed darker skin is wider than the range of shadows that I can subtract from.  So, I might deliberately elect to position the light for more specular highlights from the left side and with an exposure in-camera that provides more overexposed regions.  Of course the shadows would still be there in a similar percentage.

The best example I can think of is to imagine an artist drawing a face with black onto a white surface: the artist would draw the darker regions of the face to create the image.  However, the same artist given a black surface to draw the face onto with white chalk would be illustrating the illuminated surfaces of the face to create an image with the lighter shades.  Even if the artist drew the same person's face, the additive light image would have completely different (mostly opposite) strokes than the image drawn with the shadow detail.

The same is true when we really write with light as photographers.  We are starting with a base level of exposure and adding light to it.  It's up to us where we set our mid-point of the exposure to create different effects.  If we want a moody underexposed image or a bright light explosion of energy and color, that’s up to you.

There is no wrong way to make great photography but making your images with a Lumedyne flash is definitely in the right direction.  I still believe that the key is know what you can create with your equipment and being able to create an image straight from your imagination into your camera through better lighting techniques.

I hope that this is helpful for you.  Please let me know what you think?